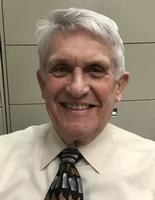 Jerry was born on April 26, 1942 in Plymouth, Indiana to the late Keith Chenoweth & Gladys (Snyder) Chenoweth.

Jerry began his career as a teacher then became employed as a chemist at Bethlehem Steel and later Raytheon Company until his retirement.

Jerry was a loving Christian father and a wonderful grandfather. He was a true family man whose greatest joy in life was spending time with his family and grandchildren. Along with creating memories with his loved ones, he loved his church and enjoyed gardening, tending his flowers, and collecting antiques. He will be dearly missed.

A funeral service will be conducted on Friday, March 19, 2021 at 7:00pm at Suburban Baptist Church in Indianapolis, Indiana with visitation from 5:00pm until the funeral hour.

Jerry will be laid to rest at Mt. Pleasant Cemetery in Greenwood, Indiana on Saturday, March 20, 2021 following a graveside service at 10:00am.